You've done your research, read the reviews, compared prices, placed your order, and waited for your wireless system to arrive.

It's been a long time coming, but finally… today is the big day!

You're going to experience that liberating moment when you realize you're no longer encumbered by cables and are free to move around while you play! Your new wireless guitar system will forever change the way you feel while playing.

Analog vs. digital
Currently, manufacturers are offering both analog and digital versions of wireless systems. Analog systems have been around for a longer time and transmit over the VHF or UHF bands. These are similar to the ranges used by radio stations. 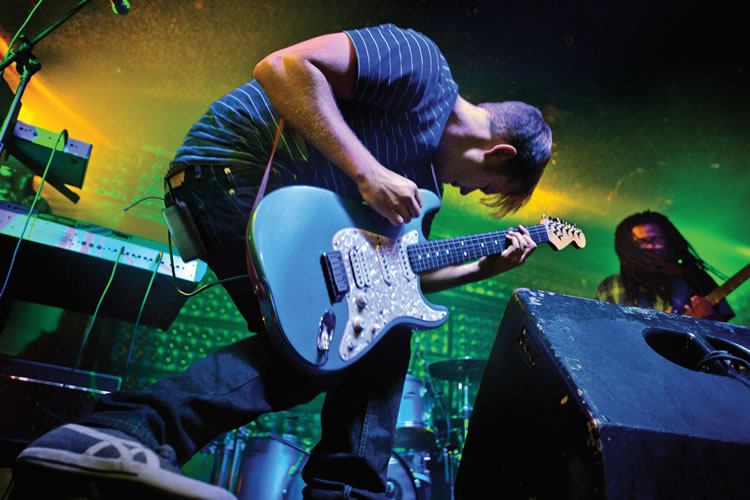 The analog process transfers the signal from the transmitter to the receiver but first compresses the signal into frequency modulation. Once converted, it sends this modified signal to the receiver, which then delivers it to your amplifier. This process is commonly called companding. Without companding, sometimes also referred to as compansion, the audio signal-to-noise ratio (SNR) of wireless systems would be too low for most professional applications. SNR is the measurement used to describe how much desired sound is present in an audio recording or performance, as opposed to unwanted sound (noise).

In general terms, analog wireless systems compress and expand the audio signal from the transmitter causing a slight dip of the audio quality.

Typically among the most affordable wireless options, some examples of analog systems include the Shure BLX series and Audio-Technica System 9.

Digital systems are more advanced and skip compression of the audio signal. Rather, they simply convert the signal into digital code and send it directly to the receiver. These signals live in the same world as Wi-Fi devices. This process reduces the chance of sound degradation and as a result, protects the integrity of your instrument's true sound.

Among the digital wireless systems available are the AKG DMS series, Audio-Technica System 10, the Line 6 Relay series, and the Shure GLX-D and PGX-D lines.

Automatic frequency detection
A handy feature that you will find included in several models and brands is the automatic frequency detection tool. Just as the name implies, this feature automatically detects the best possible frequency to use. While you are using the system, it will continually scan for the best possible signal. This is really nice, especially if you move around a lot on stage. 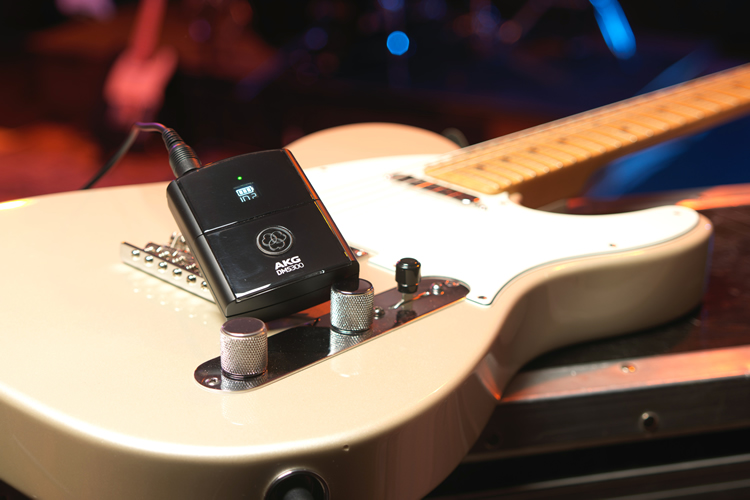 Battery life
We suggest finding a system that utilizes a rechargeable lithium-ion internal battery or battery pack or one that can accommodate AA or 9V single-use lithium batteries. They are known for their longevity and will provide many hours of musical enjoyment. Alkaline batteries are the next-best choice, with relatively long life thanks to improvements in wireless transmitter design that have reduced power draw. 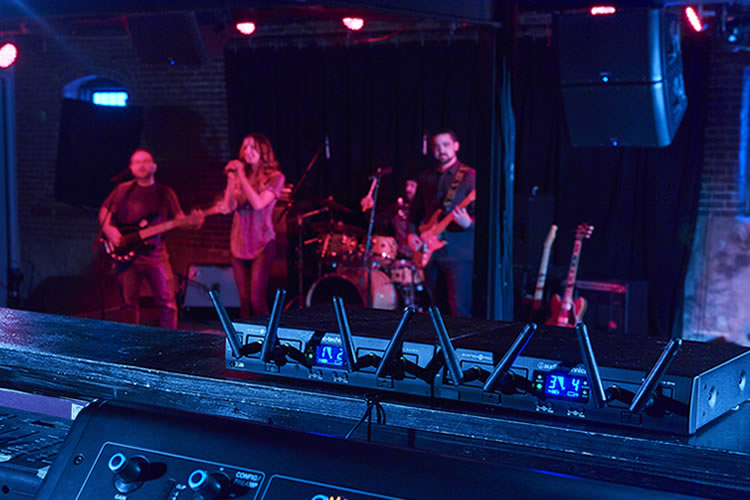 Operation range
Typically, a wireless guitar system is used on a stage. Unless you're in an arena playing for thousands of people, the stage sizes you're playing on will be manageable for your system. Find a system that offers a 100 to 200-foot range and make sure the receiver has a clear "line-of-sight" to the transmitter.

Latency
When comparing systems, look for units with the lowest amount of latency. While today's digital systems have reduced latency to negligible levels, it's still recommended that you pay attention to this specification. Earlier and lower-priced systems are especially susceptible to latency issues.

Build quality
Unless you rack mount the receiver, you'll probably need to set the unit on top of your amp, or worse, on the floor (unless it's a stompbox or pedalboard receiver, then it's meant to go on the floor!). It's inevitable that sooner or later the receiver will get bumped, fall off the amp, or get stepped on, so look for a system with a rugged case. If it feels flimsy, it probably is.

"Plug-and-play" systems, like those available from Boss and Xvive, eliminate some of these concerns by using a compact receiver that plugs directly into your amp.

There are several advantages when incorporating a wireless system into your rig. First, you'll eliminate the dangers of tripping over cords or damaging gear. This will allow you to focus more on playing, working the stage, and entertaining your audience. Additionally, you'll be able to go out in front of the speakers and hear yourself from the audience's perspective. Your new wireless system will open up a world of possibilities for your playing and performance.

MODELING - THE FUTURE OF GUITAR TONE

FINDING YOUR OWN PRE-SHOW ROUTINE