In 2016 Fender moved on from their venerable "American Standard" series and introduced the American Professional series. These new guitars featured Tim Shaw-designed pickups, as well as treble bleed circuits, giving them a balanced tone that allowed for chime without shrill overtones and power without sacrificing what made each model decidedly Fender. While there are some modern players who seek out guitars with maximum output, any true Fender fan will tell you that articulation, dynamics, and voicing are equally important factors when finding your tone or recreating the sound of your favorite guitar gods. It seems Fender has kept this in mind with the launch of their new American Professional II series. 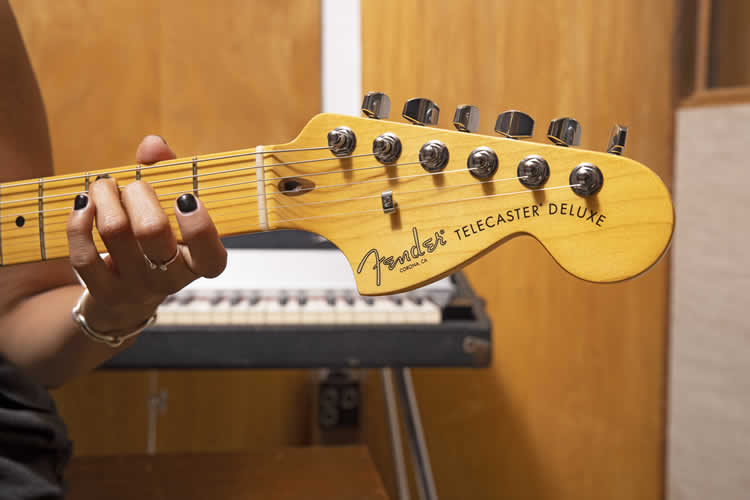 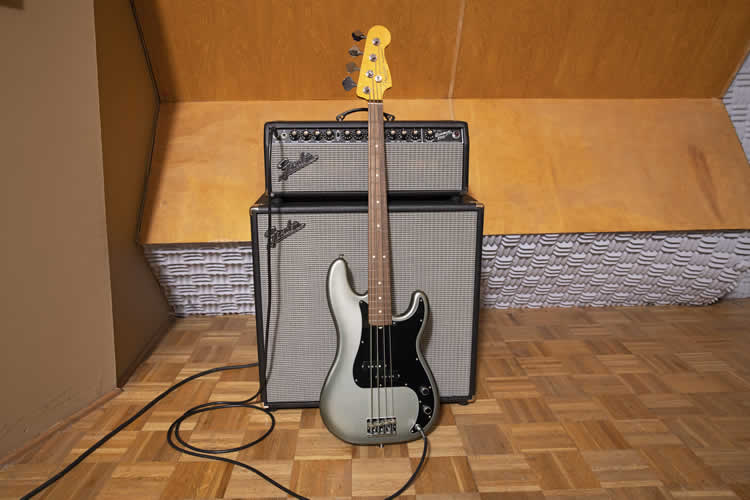 While the original American Professional pickups were quite frankly fantastic, Fender has made nuanced and focused improvements to each pickup design. Fender could have chosen to simply push further into high output, "modern" territory, but new V-Mod II pickups use an ingenious mix of alnico magnet values and boutique pickup winding methods to strike a balance in each instrument. The result is a bold, dynamic sound without sacrificing clarity and balance.

These new models offer body and neck updates as well, with the kind of detail we've come to expect from a guitar crafted in Corona, California. The new sculpted heel, narrow-tall frets, rolled fingerboard edges, and super-natural satin neck finish promise to make these some of the most comfortable Fenders you've ever played. Of course, no Fender series launch would be complete without cool new colors, and newly introduced Miami Blue, Dark Night, Mercury, and Mystic Surf Green finishes certainly offer plenty of eye candy. All Sienna Sunburst and Butterscotch Blonde finished models are now built with roasted pine, a premium body wood that until now had been reserved for limited edition and Custom Shop instruments. 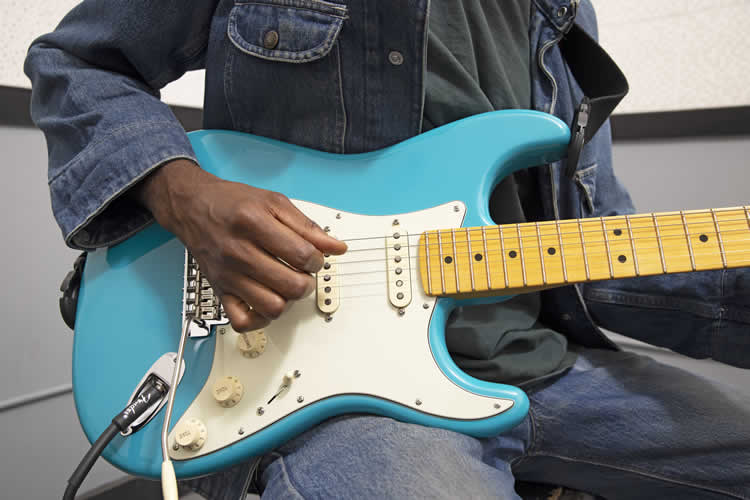 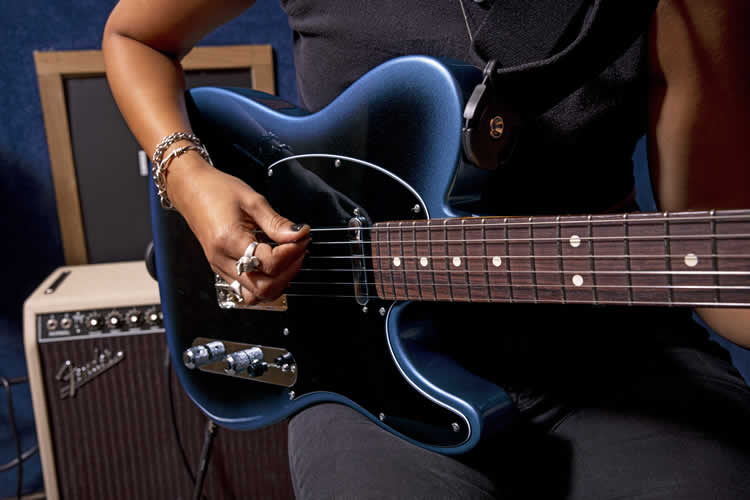 Stratocaster
American Pro II Stratocasters are offered in SSS, left-handed SSS, and HSS configurations. While the two-point tremolo bridges look familiar, they now feature a cold-rolled steel block that increases sustain, clarity, and high-end sparkle compared to standard blocks. SSS models feature a push/push selector on the second tone pot, allowing the player to add the neck pickup to positions 1 and 2. HSS models feature a push/push selector, affecting the functionality of their "Double Tap" humbucking pickup. When the pickup is used in humbucking mode, the overwound bridge coil is "tapped" at a lower output that matches the other paired coil for a vintage humbucker response. When the pickup is split via the push/push Tone 2 control, the overwound bridge coil is "un-tapped," accessing its hotter wind and unlocking a powerful, ringing Fender single-coil voice.

Telecaster
American Professional II Telecasters are equipped with new 3-saddle top-load/string-through bridges with lower profile side rails and new compensated brass "bullet" saddles that are rounded for added comfort. The new V-Mod II Tele pickups have been designed to offer a more articulate sound, with plenty of the twang that made the Tele famous. Single coil models feature a push/push tone control that puts the pickups in series mode for a hotter output when used together. Deluxe models have push/push functionality in both tone controls, allowing the player to switch each V-Mod II Double Tap pickup from humbucker to single-coil. 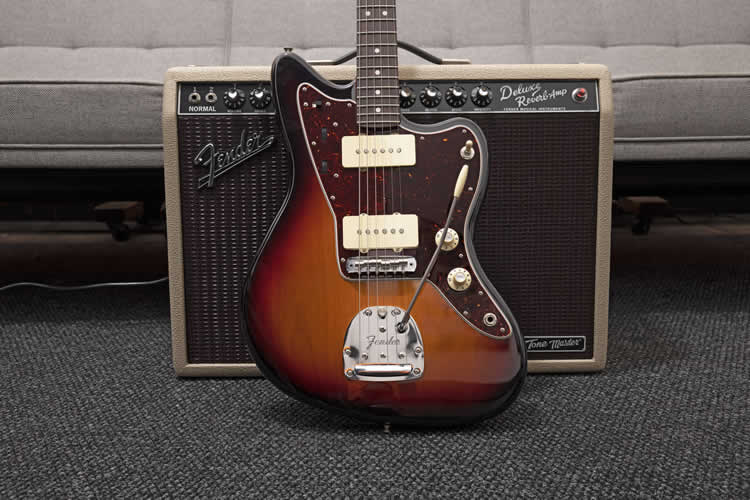 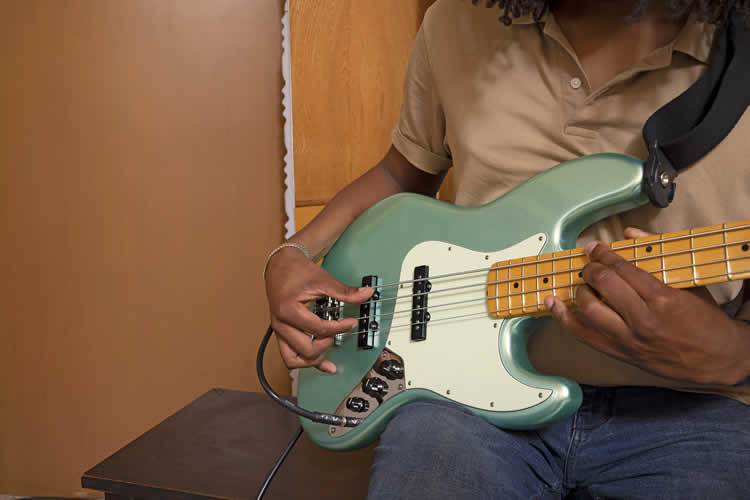 Jazzmaster
The American Professional II Jazzmaster model has a number of upgrades for players to enjoy. Fender's newly designed Jazzmaster bridge and Panorama Tremolo system offer players a much wider vibrato range, allowing players to dive into Stratocaster tremolo territories. The new V-Mod II Jazzmaster pickups have been designed to handle more copper wire windings in a deeper configuration, for a bolder Jazzmaster tone than ever before. This is a brilliant move on Fender's part, considering the treble bleed circuit will allow the player to dial back the volume and still get that vintage Jazzmaster tone. The famous Jazzmaster circuit switch not only offers instant alternate volume and tone options but now sets the pickups into series mode, boosting the power of the instrument. A push/push selector has also been added to the tone pot, giving the bridge pickup an even hotter output in both series and parallel circuits.

Basses
Fender basses have set the standard for the instrument since 1951. The new American Professional II Jazz Bass and American Professional II Precision Bass models have continued this tradition, setting a high mark that is sure to please even the most discerning players. HiMass Vintage bridges feature a cold-rolled steel bottom plate with a chrome-plated solid brass backstop that allows top mount or string-through-body anchoring, offering increased sustain and rock-solid tuning. As with guitar models, the new V-Mod II bass pickups have been tuned using a combination of different alnico magnets that allow for a balance of power and articulation, all without sacrificing the P and J tones we all love. Both basses are offered in 4 and 5 string variations, while the Jazz model adds a fretless option.