When Dave Smith Instruments discontinued its DSP-based Prophet 12 and Pro 2 synths, speculation started immediately about potential replacements. A theoretical Pro 2 successor arguably received the lion's share of prognostication, partly because Sequential's already-shipping Prophet-6 and Prophet X could be seen as sort-of replacements for Prophet 12 but mostly because Pro 2 was so beloved among its owners, with many of them reacting to news of its retirement by describing it as 'perfect' and wondering what Sequential could possibly do to improve it.

I don't know where this notion started or whether it ever actually came from the horse's mouth, but it seems to be taken as read by close followers of the company that Pro 2 didn't sell as well as they'd have liked, indicating a failure by the synth-buying public to grasp its value at a $1,999 sell price. If we assume these concerns to be true, then Sequential Pro 3 sure seems to address them head-on by reducing the numbers of keys and oscillators – and thereby reducing the price – while keeping everything that made Pro 2 so revered, mainly its deep modulation matrix, powerhouse sequencer and friendliness toward eurorack setups.

On that last point, it doesn't take anything away from the vast sound design capabilities inherent in Pro 2's four oscillators and dual filters to note that no small number of users bought it mainly for its obvious utility as a eurorack modular master controller and considered the onboard sound engine as gravy. Sequential itself devotes an entire paragraph of its Pro 3 product copy to describing how it 'plays well with modulars' via its aforementioned sequencer and four sets of control voltage inputs and outputs. 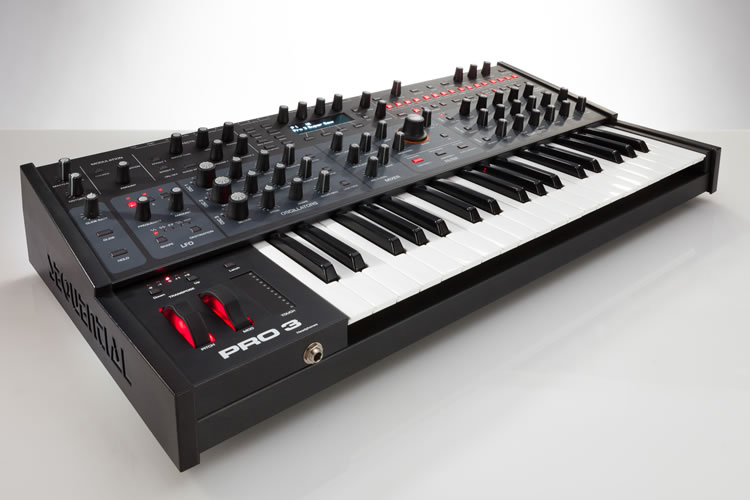 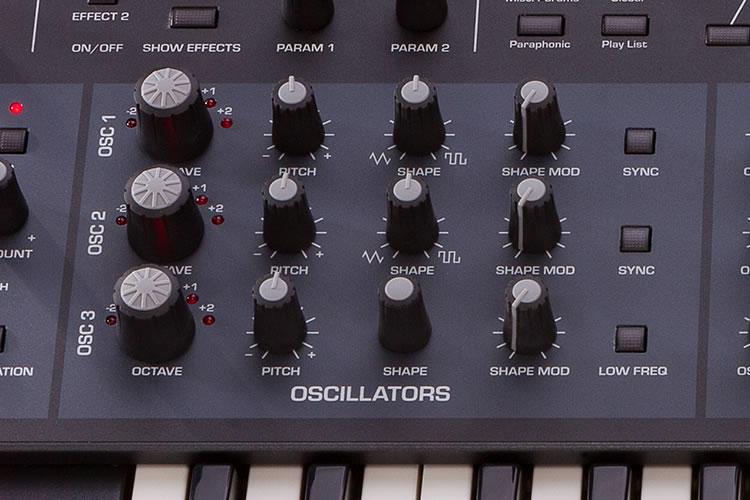 Pro 2 had a great sequencer at launch that received thoughtful additions over a series of OS updates, including but not limited to sequencer track data copy/paste in OS 1.2, paraphonic sequencing in OS 1.3 and a sequencer playback direction parameter in OS 1.4. Pro 3 rolls up all those improvements into a formidable 16-track × 16-step × 4-phrase super-sequencer. With only 1 of those tracks dedicated to sequencing notes, that leaves the other 15 to be assigned to any of the staggering 171 destinations in its mod matrix, which includes the four CV outputs. More than just the first track can be used for notes, too, allowing for paraphonic sequencing of Pro 3's three oscillators.

Speaking of which, many wondered whether Pro 3 would continue Pro 2's digital oscillator legacy, perhaps switching from old-fashioned DSP to new-fangled FPGA-based oscillators, but Dave Smith is nothing if not unpredictable and is on record as not wanting to keep making the same synths over and over, so where some expected him to zig to four FPGA oscillators he instead zagged to two analog VCOs and a wavetable oscillator, a shrewd choice with wavetable synthesis definitely having a moment right now. Pro 3's third oscillator comes with 32 wavetables of 16 waves each and can smoothly morph from one to the next with a twist of the SHAPE MOD knob.

Before Pro 2, every single modern Dave Smith synth used a Curtis IC for its filter duties, with only Pro 2's immediate predecessors Prophet 12 and Tempest making a slight departure by adding a high pass filter for further sound shaping. While more recent Sequential products offer a variety of filter flavors, Curtis ruled the roost across most of the DSI lineup, with the same chips used, for better or worse, in everything from the Evolver line to the Prophet '08 to the Mopho/Tetra family and the aforementioned Tempest and Prophet 12.

So it was no small thing when Pro 2 debuted its dual discrete filter designs, which can loosely be described as SSM- and Oberheim-derivative, with the first being a Prophet-5-inspired low pass design and the second state variable across low pass, high pass and band pass modes. Whether these are the exact same filter circuits that ended up in Prophet-6 and OB-6 is something I don't have the wherewithal to determine by ear or by oscilloscope, but at the very least Pro 2's filters provided a hint at future filter directions for DSI/Sequential. With the two new filters configurable either in parallel or in series with the state-variable filter following the 4-pole, this opened up vast new sound design possibilities.

Pro 3 continues both Pro 2's spirit of filter experimentation and its own tendency toward triplets with three filters on offer. Two are largely similar to (again, if not exactly the same as?) those on Pro 2, now described as being 'based on' the Prophet-6 and OB-6 that followed Pro 2. The new option is a standard Moog-style transistor ladder filter with a twist: Pro 3's implementation of this classic design provides a resonance compensation parameter to preserve the 'low-end punch' that doesn't make it through Moog's own filters at higher resonance settings. 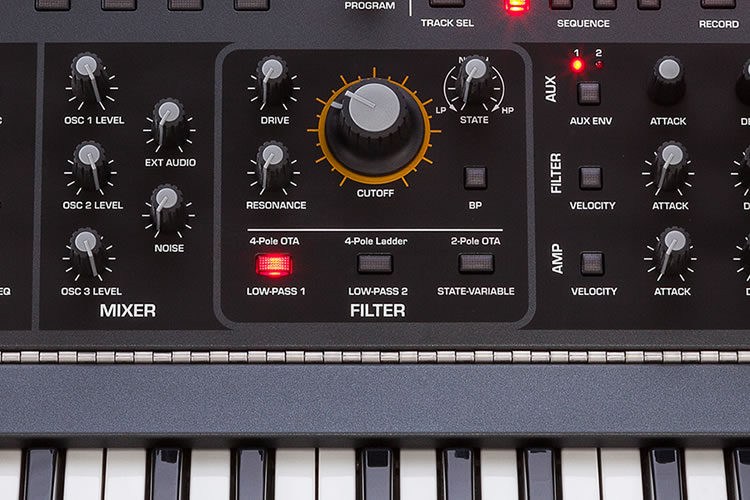 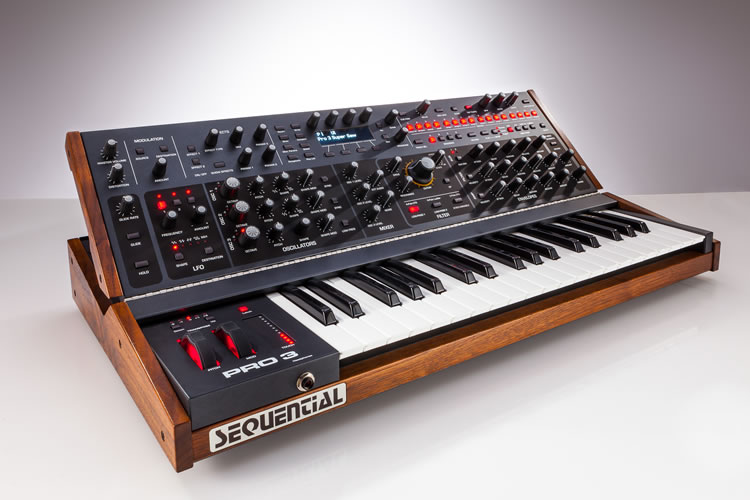 For effects, Pro 3 employs what looks to be the same dual digital effects engine used in Prophet-6, OB-6 and Prophet Rev2 to provide reverb, delay, chorus/flanger, phase shifter and ring modulation effects in addition to a separate programmable analog distortion and tuned feedback with grunge. The tuned feedback is also capable of Karplus-Strong plucked string synthesis, a Dave Smith favorite going all the way back to Evolver desktop (and arguably much further to Dave's post-SCI work on Sondius-based software synthesis).

All of this under-the-hood power is controlled through a thoughtfully designed top panel, with its oversized and high-visibility filter cutoff knob a particular favorite. 16 illuminated step buttons make interacting with the sequencer a breeze, while the standard DSI/Sequential OLED screen and four context-sensitive buttons provide a familiar interface for deeper patch editing. For performance controls there are standard (illuminated!) pitch and mod wheels along with an assignable touch-sensitive modulation strip like those found on Tempest, Prophet 12 and Pro 2.

Zooming out one step further, Pro 3 is available in your choice of two housings: the 'standard' Pro 3 has its panel fixed at a slight angle, while the Pro 3 SE 'special edition' has a multi-angle hinged panel and vintage-style walnut trim.

DSI/Sequential likes to include direct Dave Smith quotes in its new product press releases, no surprise given his legendary status and infectious enthusiasm about his own creations. At the launch of Pro 2 he went on record saying he's 'happiest creating new instruments,' while at the launch of Pro 3 he seemed more sanguine about its place in a 'Pro X' product continuum, building on Pro 2's strengths while harkening back to Pro-One's relatively compact size. By either measure, Pro 3 looks to be another instant classic bound to find a home in many modern studios.