The Crumar Seven is a Modern Specialist in Vintage Keyboard Sounds

In recent years, we have seen a number of new instruments that specialize in classic electric piano and keyboard sounds. Before you're seduced by the smooth curves of the Korg SV-1, enchanted by the fiery red Nord Electro, or stunned by the sound and stature of the Waldorf Zarenbourg, let's take a minute to consider an excellent alternative… the Crumar Seven.

Hailing from Italy, Crumar is well-known for their tonewheel organ modeler the Mojo (and more recently the Mojo 61). When we heard that they would be turning their attention to vintage stage pianos, we were intrigued, to say the least. The Crumar Seven checks all the boxes for a stage vintage piano. It focuses on a specific group of sounds and absolutely nails it. It also has an extremely cool vintage look reminiscent of a "suitcase" piano. Modern conveniences like USB and onboard Wi-Fi with web-based editor make this an awesome addition to a modern studio or stage rig. Let's dig in a little bit deeper to the design, individual sounds, and functionality of this impressive keyboard. 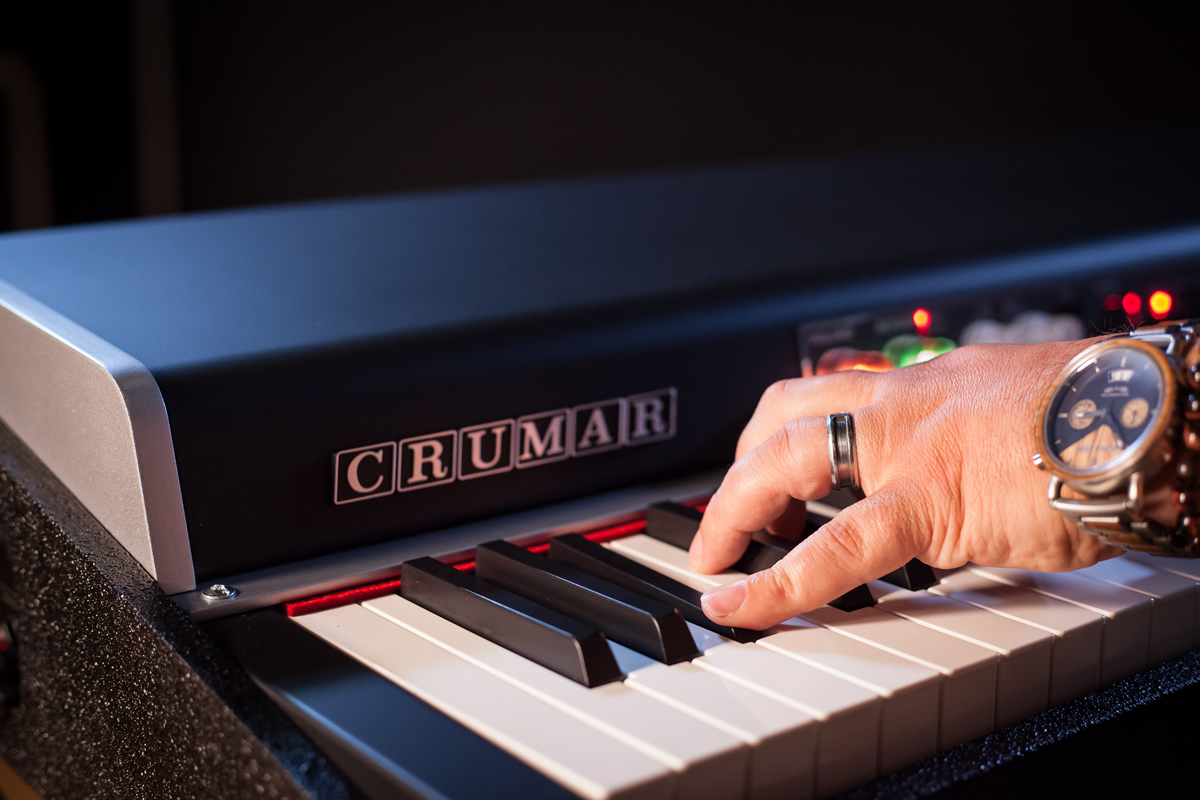 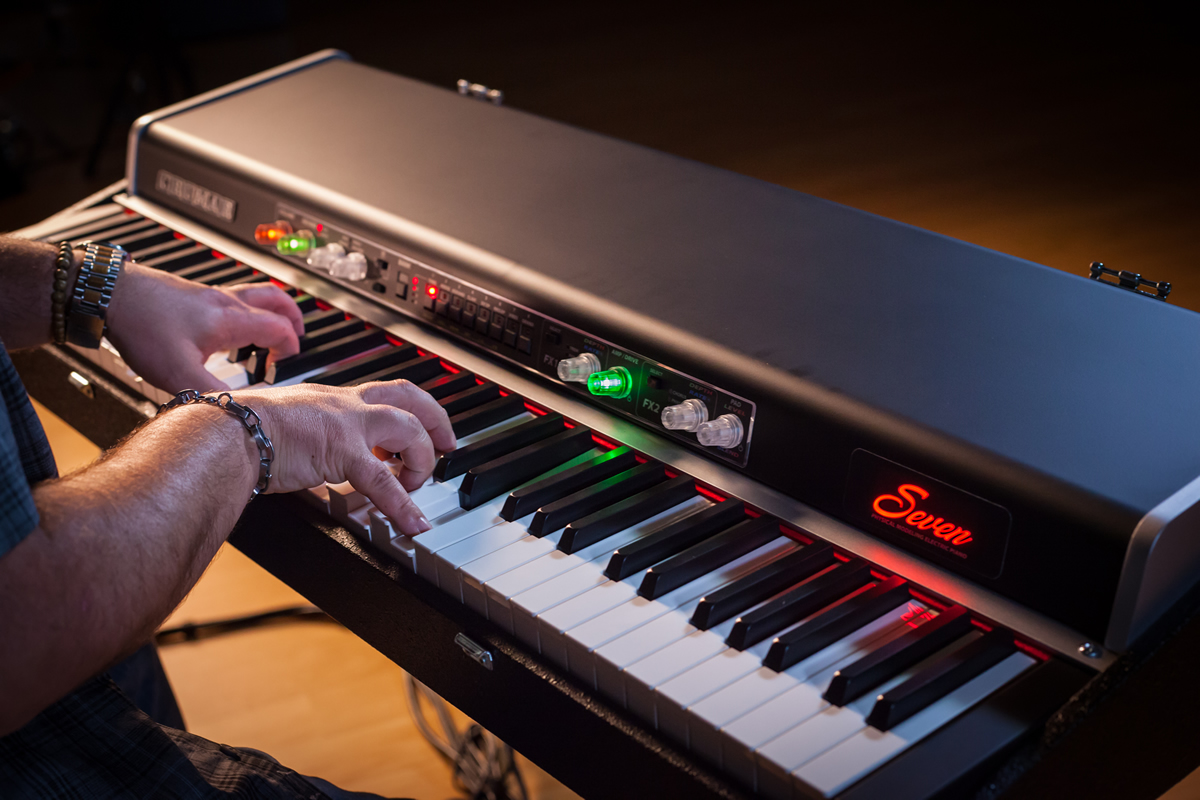 The Seven has a straightforward panel layout with translucent control knobs providing useful feedback in the form of variable LED backlighting. Sounds are selected in a matrix of eight voices by four banks. Bank 1 is dedicated to factory presets and cannot be overwritten. Banks 2 through 4 feature a nice selection of additional presets, but user patches can be tweaked and stored in these locations.

All the expected vintage stage pianos are right at your fingertips. The Rhodes (or "tine") electric piano has the characteristic sparkle and bark and pairs well with the onboard phaser. The "reed" electric piano is a modeled Wurlitzer 200A that sounds great, especially with the tremolo effect. Next up is a Hohner Clavinet D6 model that sounds absolutely wicked when a little overdrive is applied. Worth noting is that a pedal plugged into the expression input will default to controlling a wah-wah effect when the Clav is selected. Moving from the ‘60s into the ‘70s and ‘80s, we have an electric grand modeled after the Yamaha CP80, an FM piano based on the Yamaha DX7's famous "E.PIANO 1" sound, and a digital piano tone based on the Roland RD-2000/MKS-20.

All of the voices are physically modeled (with the exception of DX and MKS), and you can really hear the detail and nuance in each one. A few additional onboard sounds include a vibraphone, acoustic piano, and a virtual analog synth pad. The acoustic piano is bright, responsive, and would work nicely in the context of a full band mix, but it doesn't have the same wow factor as the electric piano sounds. However, this is a physically modeled piano, and the sound can be tailored using the editor; this sound would probably benefit from some careful tweaking of parameters like lid position, sympathetic string resonance, and hammer hardness. The synth pad can be quickly layered with any sound by touching its knob, and adjusting the knob will sweep the synth pad from a brassy, aggressive triangle wave to a smoother ambient pad. The onboard effects are outstanding and include global reverb and two multi effect engines offering phaser, flanger, chorus, tremolo, auto wah, pedal wah, panner, and delay. A basic EQ, amp simulator, and overdrive round out the effects section.

The Crumar Seven has an elegant and simple control layout, but under the hood are tons of parameters available for customization. Rather than forcing you to break out the laptop or go on a menu-diving adventure, you can use the onboard Wi-Fi access point to call up the web-based editor from any smartphone, tablet, or computer of your choice. In addition to some global settings like tuning, pedal polarity, expression pedal functions, and MIDI CC assignments, the editor offers dozens of parameters allowing you to sculpt the behavior of all the modeled pianos and effects. This is truly the best of both worlds; a simple knob and button based interface for no-nonsense control while performing, and a deep software interface ready to tweak using the phone in your pocket.

The physical design of the Seven is one of the coolest we've seen and very closely resembles the vintage instruments it's paying homage to. Despite a smooth and solid 73-note weighted key action, the Crumar Seven is ridiculously light… just over 30 pounds! The Seven is built into a sturdy wood case covered in tough black tolex. Although this design appears to be very roadworthy, you might choose to place this case into a padded roller bag to protect it from scrapes and add the convenience of wheels. The case hardware is rock solid, and removing the lid is a breeze. The included metal legs screw into the base of the instrument and are stored inside the lid during transport. A large cavity inside the instrument is available for stowing cables or pedals and is covered by a metal access door when not in use. The flat metal top of the instrument allows plenty of space for accessories, and it's easy to imagine a small organ modeler or analog synth sitting on top of the Seven for a killer live rig.

Feel free to contact Kraft Music with any additional questions on the Crumar Seven… we highly recommend this fantastic instrument!