When one of the world's largest acoustic piano manufacturers makes some improvements to their digital piano line, we take notice. At Kraft Music, we have carried the entire Yamaha Arius line of digital pianos since its inception in 2008. Every few years, Yamaha takes advantage of technology advances and makes each model a bit better. We arranged to have a new YDP-145 in the black walnut finish and a YDP-165 in dark rosewood brought to our studios to have a closer look. We were also fortunate to host Gabriel Aldort from Yamaha to shoot some videos while we had both pianos up and running. 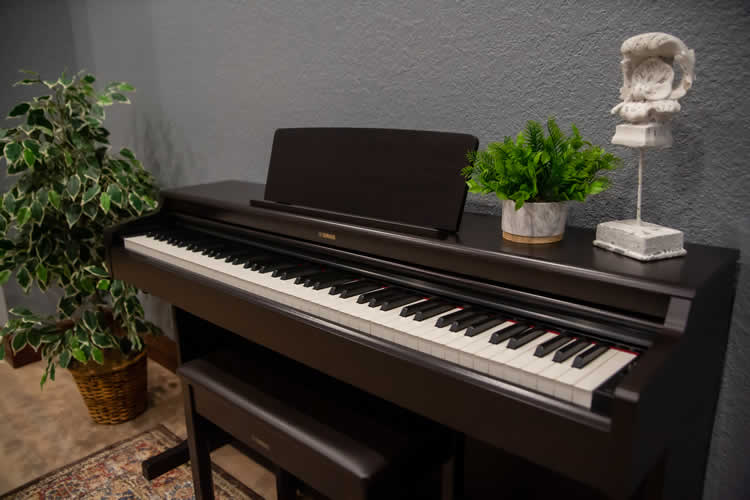 After assembling the pianos (see our exclusive YDP-145 and YDP-165 assembly videos), it was apparent that they both achieve their goal in providing a "classic and elegant design." These are digital pianos that will fit well in all types of rooms, and with all types of decor. Both models include a custom, matching Yamaha piano bench that ships in the box with the piano.

Operating each piano is very similar: the on/off button and volume control knob are on the far right of the piano, and buttons for selecting the 10 tones, recording, and advanced settings are all on the left. Headphone connectors are directly underneath the left side the piano, and easy to get to. The YDP-165 includes a headphone hanger for convenient headphone storage, as well as handy music clips located on the music rest to keep your music book open and in place.

Each piano also features a USB TO HOST port (located under the piano) used for connecting to your computer or mobile device. Speaking of mobile devices, Yamaha's Smart Pianist app is really the best way to operate the piano, making it easy to control the piano's functions and learn your favorite songs. Gabriel does a nice demo in his video that highlights the app. I usually prefer to have several buttons on the panel of the piano to make it easier to select and layer sounds or to start the metronome, but Smart Pianist makes that a non-issue. 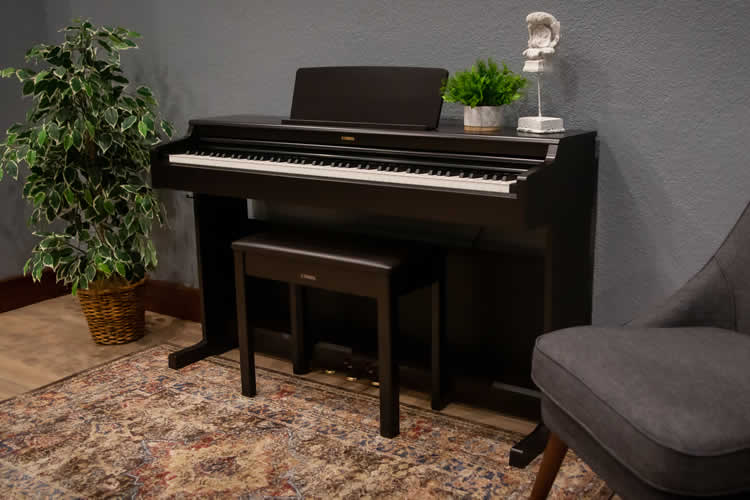 So how do they play and sound? I started with the YPD-145. Yamaha's familiar GHS weighted action feels good, simulating a real piano in that it is heavier on the lower keys and a bit lighter on the high keys. The piano sound is authentic, as the newly improved Yamaha CFX Sound Engine recreates a concert piano. I've always liked Yamaha's choice of additional tones in these YDP models, including electric pianos, organs (pipe and jazz), and a rich orchestral string tone.

Moving to the YDP-165, it's obvious (to me) where the additional price comes in. First, the speaker system is quite an improvement. 20 watts (compared to 8 watts) makes for a deeper sound, and accentuates new features such as Yamaha's VRM Lite (Virtual Resonance Modeling) and Tone Escapement.

Also, the key action on the YDP-165 is noticeably different. You'll feel Yamaha's synthetic ebony and ivory keytops under your fingers, again simulating the feel of an acoustic piano. This is the Yamaha GH3 key action, different from the more standard GHS action that is on the YDP-145. A beginner may not appreciate the difference, but more experienced players will immediately notice the added responsiveness of this action.

Overall, the Arius YDP-145 and YDP-165 should certainly be considered by those looking for an affordable, furniture-style digital piano. Their appearance certainly says "piano" as opposed to "keyboard," and their sound and touch are well suited for the hobbyist, student, or parent of a student.

PRODUCTS MENTIONED IN THIS ARTICLE