As soon as she burst onto the scene with her 2015 single 'Ocean Eyes,' it was clear that Billie Eilish is a force to be reckoned with. In the years since, she has established herself as a new kind of pop culture icon, taking the fashion and music industries by storm on her own terms. Billie's meteoric ascent to pop stardom started with the ukulele, the first instrument she learned to play. Designed in collaboration with Billie Eilish, her Fender Signature Ukulele is a stage-ready instrument that embodies Billie's bold, unmistakable style. This concert ukulele is built with sapele top, back and sides featuring a matte black finish with Billie's 'blohsh' symbol. It also includes a Fishman Kula preamp for those looking to plug in. Whether you're an experienced musician or looking to pick up your first instrument, one thing is true: you can play anything on the ukulele. 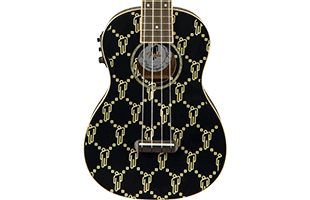 Unique aesthetics
Adorned with her blohsh logo, this ukulele reflects Billie's iconic signature style, as unique and distinctive as her voice. 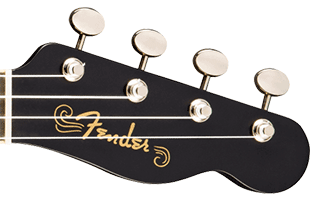 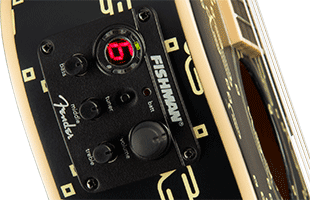 Fishman Kula electronics
The Fishman pickup/preamp system with a variety of onboard controls amplifies your instrument without compromising its pure, rich and resonant tone. 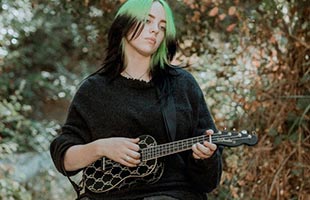 Billie Eilish's first full-length effort, 2019's When We All Fall Asleep, Where Do We Go?, debuted at the top of the Billboard charts and launched six Top 40 singles, including the number one smash 'Bad Guy.' She's toured the world, became a pop-culture icon and picked up five Grammys including Best New Artist, Record of the Year, Song of the Year and Album of the Year. While Eilish is known for her genre-defying pop sound, it all started for her on an acoustic instrument: the ukulele. At six years old, she used the compact four-string to play her first song, the Beatles' 'I Will.' 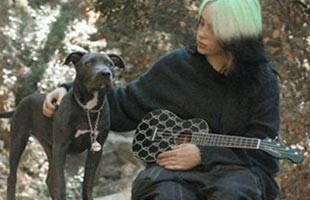 Back to her roots
Since then, Eilish's music has evolved and matured, but the ukulele is still an integral part of her sound. 'I think the ukulele brings a different feeling to every single song, and it inspires a different kind of writing,' she says. 'Different instruments always make me write differently.' Fan favorites like 'Party Favor' and '8' feature the instrument alongside more modern production elements, and a quick internet search reveals uke adaptations and tutorials for everything from 'When the Party's Over' and 'Everything I Wanted' to the still-sinister 'Bad Guy.' 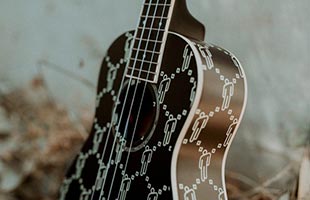 Everything she wanted
Now, Eilish has teamed up with Fender to create the Billie Eilish Ukulele, an instrument that nods to the superstar's musical roots while also reflecting her singular style. This 15" scale-length uke features a concert-sized body constructed of Sapele with an open-pore satin finish, as well as a Nato neck and flat walnut fingerboard with 16 frets (12 frets to the body) and white dot inlays. Sealed nickel tuners, a bone nut, nickel hardware and an abalone sound hole rosette round out the instrument. 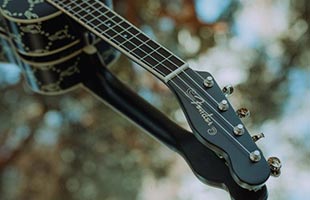 While Eilish learned to play a uke in her bedroom, her new signature model is unquestionably a stage-ready instrument – equipped with a Fishman Kula Preamp with volume and tone knobs, a three-band EQ and built-in tuner and a stunning matte black finish emblazoned with Billie's signature 'blohsh' symbol in repeating patterns. Budding players can now pick up this very uke to begin their own stringed-instrument journey. 'The great thing about this ukulele is that the one you see Billie playing onstage in front of 30,000 people is the exact same one you can buy in the store for under $300,' says Michael Schulz, Fender's Head of Signature Artists. 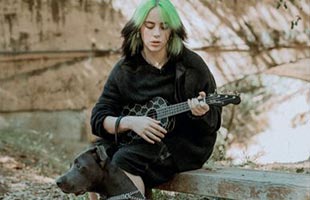 Whether you're a beginning player or a world-renowned pop superstar, the Billie Eilish Ukulele covers all the bases with inimitable Fender sound and feel – and, of course, Billie's own signature style. And for those doubting their uke abilities, the pop phenom's got some encouraging advice: 'The rules of ukulele are: If you know three chords, you can play any song. Ever.'

In recognition of Billie's connection to the ukulele as her first instrument and the history of the ukulele in Hawaii, Billie and Fender are making a gift to the Aloha Mele Fund, a newly-established fund of the Hawaii Community Foundation. The funding will be distributed to nonprofit organizations that are working to support pandemic relief efforts for Native Hawaiian and Pacific Islander communities in Hawaii.

Fender warrants this Fender or Squier acoustic guitar or bass to be free from defects in materials and workmanship for two (2) years from the date of original purchase, subject to limitations set forth herein ('Limited Warranty'). This Limited Warranty applies only to the original retail purchaser when this instrument is purchased from an Authorized Fender Dealer and is subject to the limitations set forth herein.

Please retain your original sales receipt, as it is your proof of purchase validating this limited warranty.