'Knobby FM synth' may be enough for many, but Korg's new keyboard is so much more

Like all instruments, Korg OpSix Altered FM Synthesizer deserves to be evaluated on its merits while also existing in a continuum of other instrument designs, trends in music and sound, and the shifting collective preferences of musicians and sound designers. OpSix performs admirably in both arenas.

Placing it for a moment in the context of other FM synth products (amidst a renewed interest in and awareness of FM synthesis in general), it's fair to say that if a new FM synth in 2020 has one job, it's to somehow provide a more tactile implementation, to be the mythical 'knobby FM synth' that goes some way towards atoning for decades of FM synth interfaces more akin to a spreadsheet than a Stratocaster.

After all, if all you wanted was to modulate FM's parameters – OpSix is no slouch on this front, either, by the way – there's many years' worth of software implementations to let you do just that. There have also been grooveboxes and workstations that house FM synth engines and expose their parameters to manipulation by sequencers.

Some of those standalone hardware instruments even provide limited performance controls through dedicated and/or assignable knobs and buttons – and obviously the option has always existed to do the same with FM softsynths and MIDI controllers – but even with all that there's never been anything that quite elevates an FM synth to something whose parameters can be performed on the way so many subtractive synth virtuosi have with familiar filter/envelope/etc. controls. 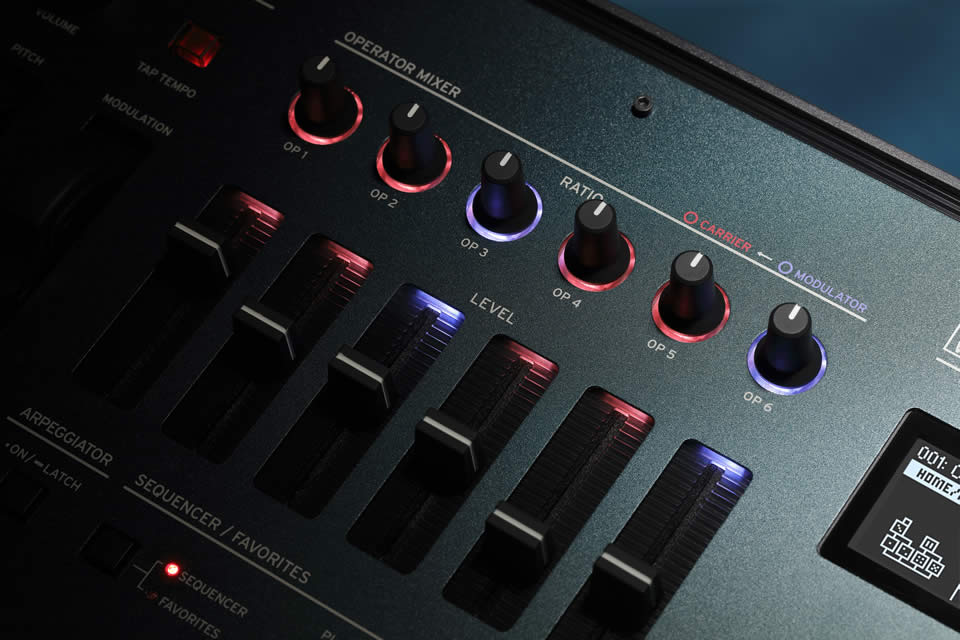 It's hard to overstate what a revelation the OpSix operator mixer is on this front, in particular its vertical operator level sliders that cannily co-opt a widely-shared musician muscle memory borne of interacting with organ drawbars and DJ/console/live mixers to finally let you 'play the panel' the way you might with a Model D or a Prophet-5.

OpSix is, as the name suggests, a six-operator FM synth and there are six dedicated sliders in this bank, one for each operator. Inasmuch as an operator can, depending on the FM algorithm in use, be either a carrier or a modulator, the sliders light up red or blue respectively to let you know which is doing what (and, over time, to enhance your intuition about how the many onboard algorithms produce their distinctive sounds).

In our hands-on with OpSix, it was endlessly fascinating to call up a patch, glance at its familiar algorithm block diagram on the screen and the corresponding red/blue lights on the operator mixer and then grab those level sliders and just start playing them. Raising or lowering a carrier operator's slider will have a more obvious and direct effect on its volume in the overall patch, but as you might expect it's often more satisfying to grab one of the modulator sliders instead for more drastic changes to the sound.

It will be interesting to watch musicians who get intimately familiar with the operator mixer perform on it, whether in tandem with a virtuoso keyboard performance or while a sequence/arpeggio plays, to see what new sounds and articulations come out of throwing or nudging those sliders individually or en masse the way so many electronic and keyboard musicians have over the years with the aforementioned mixer sliders and organ drawbars. 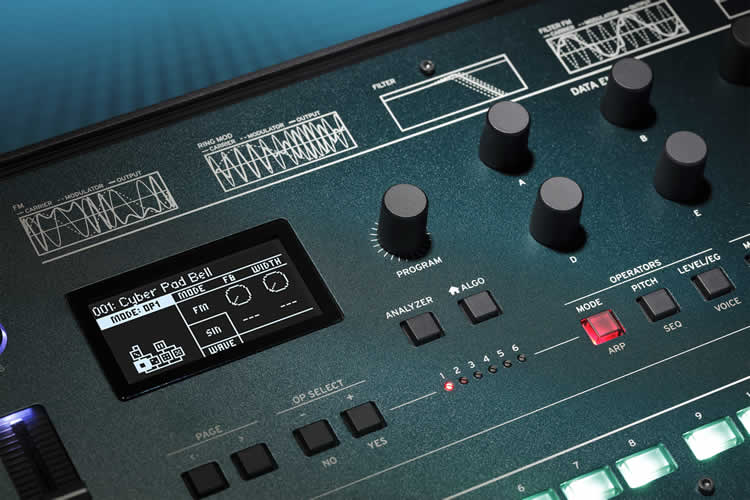 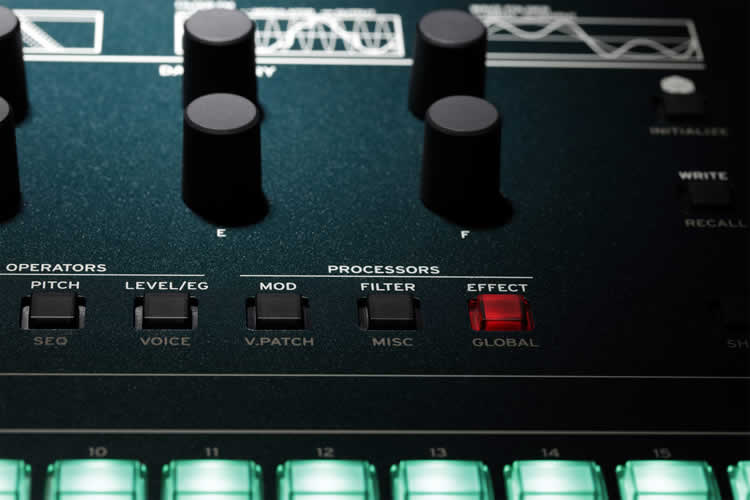 Having nailed the 'knobby FM synth' side of things and having finally given FM synthesis its Stradivarius, Korg didn't rest on its laurels, either, because under the hood on OpSix there's an extensive apparatus of automation and modulation systems that can interact with one another and whose interactions with the core FM engine are only enhanced by its digital nature, exposing subtle parameters to manipulation and modulation that simply can't be reached on a synth with analog circuits and an analog signal path.

Standard EGs/LFOs, a 'logue-like sequencer with six lanes of motion sequencing and a modular-style 'virtual patch' system can all affect a long list of parameters across the synth engine and signal path; these systems combine and overlap for some truly surprising and fascinating results, with many long and evolving/rhythmic multi-modulations effectively demonstrated by a generous bank of factory presets. 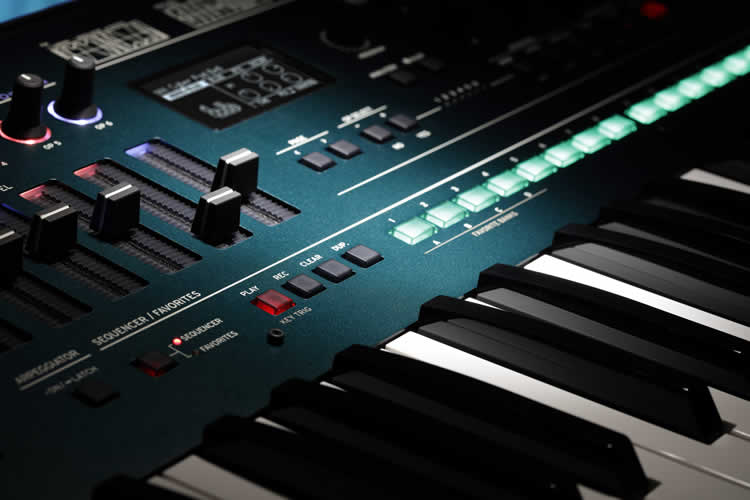 From Korg's recent Wavestate, OpSix gets its full-size 37-note keybed and its sleek, black, Minilogue-descended wedge shape. (By happenstance and through some cosmic coincidence, this also gives it an uncanny resemblance to a popular DX-style 'concept rendering' that made the rounds some years ago when FM synth fans could only dream of something like OpSix.)

Also from Wavestate we get a generous bank of digital effects and a host of modeled filters, including MS-20 and Polysix, while from the wider family of recent Korg synths we get the on-screen oscilloscope and spectrum analyzer. If it seems like we're only giving passing mention to these great features here, it's only because we were so blown away by the revolutionary tactile instrument interface on top of the OpSix panel and intricate automation/modulation mechanisms underneath.

OpSix looks great viewed through both the lenses we suggested at the outset: it succeeds tremendously on its merits as a performance instrument and sound design laboratory while also delivering exactly what's needed and desired from a dedicated FM synth introduced in 2020. Whether you're an FM diehard excited by this state-of-the-art (dare we say definitive?) implementation or just looking for a deep, desert-island standalone synth to get lost in its possibilities, OpSix is a great option, truly more than the sum of its parts.

A QUICK LOOK AT THE KORG NU:TEKT NTS-1 DIGITAL KIT