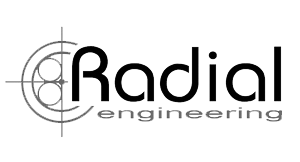 Applying for Financing is Quick and Easy!

No interest if paid in full within 18 months*

On select brands purchased with your Synchrony credit card. Interest will be charged to your account from the purchase date if the promotional purchase is not paid in full within 18 Months. Minimum monthly payments required. No minimum purchase price unless stated.

Skip to the beginning of the images gallery
Overview

Stereo direct box designed for keyboards
The Radial ProD2 is a compact stereo direct box developed specifically to address the needs and challenges of interfacing a stereo keyboard to a professional audio system. This passive DI features two independent channels with separate inputs and thru-puts for the artist's stage amp and two fully isolated outputs for the PA system.

At the heart of the design are two high performance Eclipse ET-DB2 transformers. These deliver 20Hz to 20kHz performance with less than 1.5dB deviation above 18kHz and are able to withstand tremendous signal levels without distortion. Unlike active circuits that overload when the signal exceeds the rail voltage, transformers saturate. This creates a pleasing effect that naturally rounds out the tone, acting like a subtle limiter which is particularly advantageous when interfacing the ProD2 with digital pianos, samplers and drum machines that can produce excessive dynamics. Transformers are particularly adept at eliminating hum and buzz caused by ground loops.

As with all Radial products, the ProD2 is built tough to handle the rigors of professional touring. A 14-gauge steel ultra rigid i-beam skeleton frame eliminates opportunity from outside stress to flex the sensitive PC board and cause premature solder joint failure. The innovative book-end design creates a protective zone around the connectors and switches further increasing lifespan. And a full bottom no-slip pad adds mechanical isolation and electrical insulation to further reduce opportunity for noise.

The Radial ProD2's warm sound, legendary build quality and compact design have made it the most popular stereo direct box made today.

Sound quality
Today, most keyboards are digital. This means that they employ buffers or internal gain stages to produce the output signal. As such, they can generate a ton of signal. In fact the most common problem with keyboards is that they will often overload the input stage of most devices. This is particularly acute with digital pianos. These not only have a very wide frequency range, they are exceedingly dynamic.

To address the higher output and dynamics of today's keyboards, the decision was made to employ a passive signal path. In other words, instead of using an active buffer that could potentially distort, the 'engine' inside the ProD2 is a transformer. You can hit the ProD2 real hard with tons of signal and it still sounds great! This is due to the way transformers distort. Unlike active circuits that 'square wave' once you exceed the rail voltage, transformers saturate. This means that the onset of distortion is more gradual. This creates a natural limiting effect that is often referred to as 'vintage' sounding.

Because the Radial ProD2 is passive, it does not require any powering whatsoever. A specially designed transformer does the high-to-low impedance transfer and balances the signal so that it can drive the signal well over 300 meters (1000 feet). The custom wound Radial transformers employ a special nickel core that produces an exceptionally linear response from 20Hz to 18.5kHz. This is sufficiently broad to handle the most demanding artist and of course wider than the frequency response that is available from most PA systems.

Transformers also benefit by eliminating the buzz and hum caused by ground loops. These are more prevalent when interfacing two AC powered devices such as a keyboard and a mixer that share the same earth ground. By lifting the audio ground and isolating the two devices, noise magically disappears!

Feature Set
When developing the ProD2, we wanted to combine high performance with simplicity. In other words, we really wanted it to be plug & play easy to use. And because so many keyboards are stereo, it of course had to address this need.

Each channel is equipped with a separate 1/4" input for the instrument and a1/4" thru-put to allow local monitoring. The 3 pin XLR-male balanced output connects to the mixer. Because all of the connectors are electrically isolated from the metal shell, both channels are completely independent. This enables the ProD2 to be used with two completely different instruments without worry of cross-talk or contamination. This is furthered with separate -15dB pads on each channel that enable you to optimize the signal path should two different instruments be connected.

Transformers are particularly effective at eliminating hum and buzz caused by ground loops. Because audio is passed via a magnetic bridge, the electrical connection between the input and output is completely disconnected. A single dual channel ground lift switch allows the user to also disconnect the ground for 100% isolation.

Construction
As with all Radial gear, the ProD2 is built tough to handle the rigors of professional touring. DI boxes get particularly harsh treatment as they are often tossed on the stage floor, kicked around and of course cables are tripped on further increasing stress. The internal I-beam skeleton provides maximum rigidity to avoid PC board stress that could cause solder joints to prematurely fail. The book-end design further protects the connectors and switches from abuse. And because the ProD2 can be rack-mounted using the J-Rak, as many as 16 channels can be set up in two rack spaces for unequaled flexibility.

This product comes with a 3-Year Transferable Warranty. This means that if you buy the product and decide to sell it, the warranty can be transferred to the person that buys it from you, thus providing continuous warranty support and added value. If you sell the product, you must provide the buyer with a copy of your original invoice so that he, in turn, may be able to submit this should a warranty claim be required.

The warranty does not cover any consequential or inconsequential damage or any losses. Specifically, if you have a problem due to defect, you must make the arrangements and cover the costs to return the product to Radial with a copy of the original sales invoice and Radial will repair the product and return it to you at its cost.

As with all typical warranties, only manufacturing defects are covered. Furthermore, parts that are subject to wear and tear such as switches, potentiometers and tubes are not covered under this warranty. This, however, does not mean that these will not be repaired or replaced free of charge. We pride ourselves in supporting the products we sell and will often exchange these parts free of charge pending the age of the device. This decision will be undertaken by RADIAL and in no way obliges the company to perform such tasks.

All transit times are based in business days. Please allow 7-10 business days for most freight shipments. Business days are Monday through Friday and do not include public holidays and weekends (Saturday/Sunday.) For questions regarding estimates to your specific location, please contact us at [email protected] or 800-783-3368.
LEARN MORE