What's included in this bundle:

Korg LP-380U provides a brilliant piano sound in a low-profile, slim design. The flat-top cabinet looks stylish even when the key cover is closed. The high-output amplifier and speakers accurately reproduce a realistic piano sound, while Korg’s flagship RH3 keybed enables expressive performances. Use onboard USB to connect with lesson software and record your piano performances to a mobile device.

Adding this subwoofer provides an amazing digital piano experience. In addition to enhancing the bass response of the piano's lowest notes, the sub will also add fullness and power across the middle and higher keys. The result is a much more realistic and natural sounding instrument...we highly recommend this upgrade! This sub is also great for general audio and home theater applications.

This piano bench features a handsome furniture-like appearance, and its padded seat is comfortable to sit on. Plus, it features a flip-top compartment that provides storage for music and more!

This clip-on light features 10 high intensity white LEDs, which provide a wide area of coverage and illuminate up to four pages of sheet music.

Whether you're practicing on your digital piano, mixing your latest recording, or rocking out with your electronic drum kit, these comfortable, over-ear headphones will provide quality sound. Enjoy music at any time without disturbing your neighbors!

This 1/8" TRS to dual RCA cable is ideal for connecting an iPod, laptop, or similar device to a hi-fi receiver, sound system, or monitor station.

This cable is designed to interconnect devices with USB interfaces. It is ideal for connecting an audio interface, USB microphone, USB capable electronic instrument, or many computer peripherals to a Mac or PC.

Korg LP-380U provides a brilliant piano sound in a low-profile, slim design. The flat-top cabinet looks stylish even when the key cover is closed. The high-output amplifier and speakers accurately reproduce a realistic piano sound, while Korg’s flagship RH3 keybed enables expressive performances. Use onboard USB to connect with lesson software and record your piano performances to a mobile device.

Slim and stylish design
LP-380U is a digital piano with a style to match your interior decor. Under 14" in depth, it's slim enough to fit anywhere. The wooden key cover is flat on top, allowing the instrument to blend elegantly into your room when you're not playing it. Keeping safety in mind, the cover uses a 'soft landing' mechanism to ensure that it closes gently. 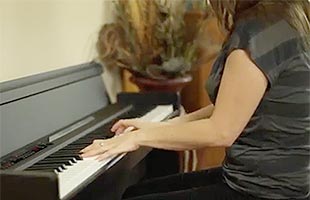 Rich piano sounds that you'll enjoy playing
In order to reproduce the playing feel of an acoustic piano as closely as possible, the sound switches between four piano samples according to your playing dynamics. From subtle touches to powerful crescendos, the sound will respond realistically to your playing. In particular, the Classic Piano and Grand Piano sounds realistically reproduce the damper resonances that occur when you hold down the damper pedal of an acoustic piano, making the overall sound of the piano even more pleasant and enjoyable to play. 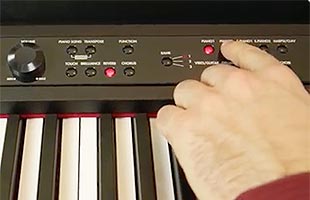 30 high-quality sounds including authentic vintage electric pianos
As a musical instrument manufacturer, Korg has placed particular emphasis on the electric piano sounds. They not only reproduce the way that the tone responds to your touch, but they also reproduce the subtle noises that occur when you release a key. Six varieties are provided, covering the sounds widely used in pop music of the '60s and '70s, as well as some of the tones that are highly regarded in soul music.

There's also a Layer Mode that lets you play two sounds together, as well as a Partner Mode that divides the keyboard into left and right regions so that two people can play the same range of pitches at the same time. Two headphone jacks make it convenient for two people to enjoy playing LP-380U together. You also have a choice of nine different temperaments, supporting historically authentic performances with period instrument ensembles.

There are three effects: brilliance adjusts the brightness of the tone, reverb simulates the natural ambience (reverberation) of a concert hall and chorus adds spaciousness. 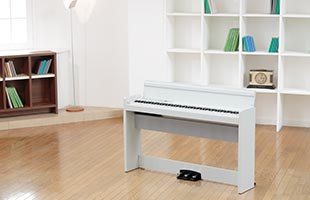 High-output amp and speaker section
The amplifier (22W × 2) boasts the highest output in its class, properly reproducing expressive piano sounds with rich tone, sonorous lows, sparkling highs and gorgeous resonance. Two large-diameter speakers are placed inside the cabinet, allowing the sound to resonate for even richer depth. Placing the speakers below the keyboard creates the sensation that the sound is enveloping the entire piano, providing even greater realism. 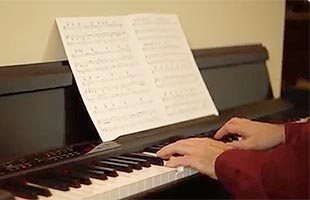 There's also a Key Touch Control function that lets you choose one of three levels to specify how your playing dynamics will affect the sound, allowing you to personalize the instrument to your own keyboard touch. With a view toward the environment, no lead is used in the hammers of the keyboard. 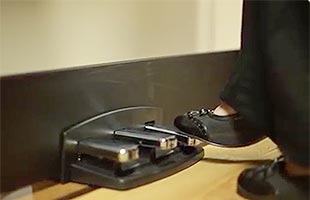 Premium pedal performance
LP-380U includes all three pedals that are normally found on a concert grand piano, including support for realistic half-pedaling on both the damper and soft pedals. These pedals are affixed to LP-380U in the perfect position for an authentic piano playing experience. 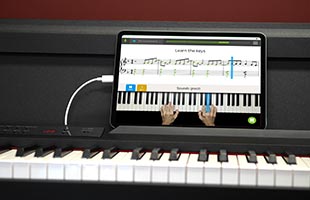 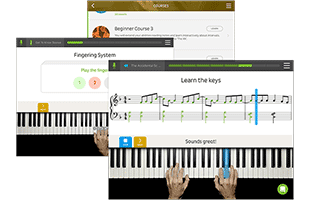 Three-month premium plan trial for Skoove online piano lessons included
Skoove is the fastest and most broad-based platform for learning piano performance. Through the three steps 'hear, learn, perform' you'll acquire performance skills and musical ear training. More than ten courses and more than 300 songs are provided, and others are constantly being added. Skoove provides lessons that are appropriate for the needs and skill levels of those who are just starting piano as well as those who can already play. 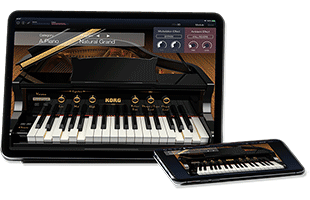 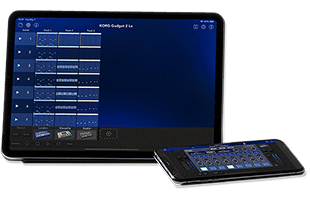 Korg Gadget 2 Le DAW music production app included
This is a mobile music production app for iPad/iPhone that provides miniature synthesizers and drum machines called 'gadgets' and allows you to freely combine these to enjoy producing music with an intuitive interface.

Korg digital piano models LP-380, C1 Air, and G1 Air purchased from a Korg USA authorized dealer are warranted to be free from defects in material and workmanship to the original consumer for a period of three (3) years.

Tubes, AC Adapters and Foot Switches are warranted to be free from defects in material and workmanship to the original consumer for a period of ninety (90) days.

The product must be purchased from a Korg USA authorized dealer and have a valid serial number.

This warranty is valid only in the USA.

Damage resulting from the following causes are excluded from the warranty set forth above: misuse, including damage occurring during shipment, damage caused by battery leakage, accident, fire, unauthorized repairs, tampering, cosmetic damage or other types of damage which are the result of improper handling or abuse; the cleaning of controls or contacts due to exposure to dirty, dusty, or otherwise contaminated environment; damage resulting from modification; damage to units used for loan or rental.